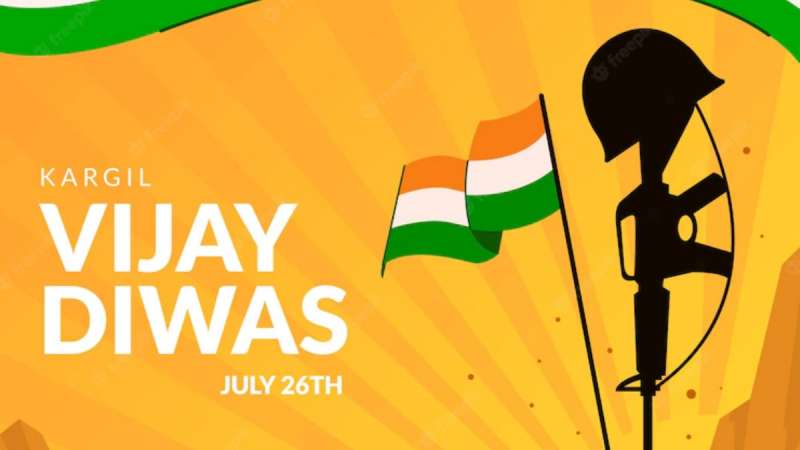 Kargil Vijay Diwas 2022: July 26 is commemorated as an important day in Indian history. The day is dedicated to martyred soldiers who lost their lives for their country. The day is observed on July 26 every year in honour of the Kargil War Heroes. Indian and Pakistani armies fought the Kargil War in May-July 1999 in the Kargil district of Kashmir and elsewhere along the Line of Control (LoC). India launched 'Operation Vijay' to clear the Kargil sector of infiltration by the Pakistani soldiers and Kashmiri militants on the Indian side of the Line of Control.

Kargil Vijay Diwas is observed every year on July 26.

Kargil Diwas Day marks the gallant victory of the Indian armed forces against Pakistani intruders between May-July 1999 in the Dras, Kargil and Batalik sectors of western Ladakh.

The Kargil war, in which the country lost more than 500 soldiers, was declared over on July 26, 1999, after Indian soldiers pushed back Pakistani troops, a bulk of them drawn from the neighbouring country's Northern Light Infantry, from the captured peaks in Kargil. The day is observed as 'Kargil Vijay Diwas' to commemorate India's victory.

After the Indo-Pakistani War of 1971, relations between India and Pakistan were tense but the countries had avoided military conflict until Kargil War. However, during the 1990s, escalating tension and conflict owing to separatist activities in Kashmir, as well as the nuclear tests conducted by both countries in 1998 gave thrust to this impending conflict.

None of the countries wanted this war, in fact, they even signed the Lahore Declaration in February 1999, promising a peaceful and bilateral solution to the Kashmir conflict. However, in the winter of 1998–1999, Pakistani Armed Forces' elements sent Pakistani troops and paramilitary forces, into the Indian territory across the line of control (LOC). This was code named as "Operation Badri". This was done to weaken India's military position in the area and sever the link between Kashmir and Ladakh which would have led Indian forces to withdraw from the Siachen Glacier and call for a settlement in the Kashmir dispute.

At the beginning, an international conflict wasn't expected but later discoveries revealed that it was a planned attack on India. To Ascertaining the extent of the infiltration, India responded with Operation Vijay and mobilised 200,000 troops. Operation Safed Sagar, which became a part of the Army on May 26 was launched by the Indian Air Force.

With Army and IAF already in operation, the Indian Navy strategically mounted pressure on Pakistan through Operation Talwar, which included aggressive patrolling off the Pakistani coasts.

After a long battle, the war finally came to an end on July 26, 1999, with the eviction of Pakistan Army troops from their occupied positions, thus marking it as Kargil Vijay Diwas. 527 soldiers from the Indian Armed Forces lost their lives during the war.