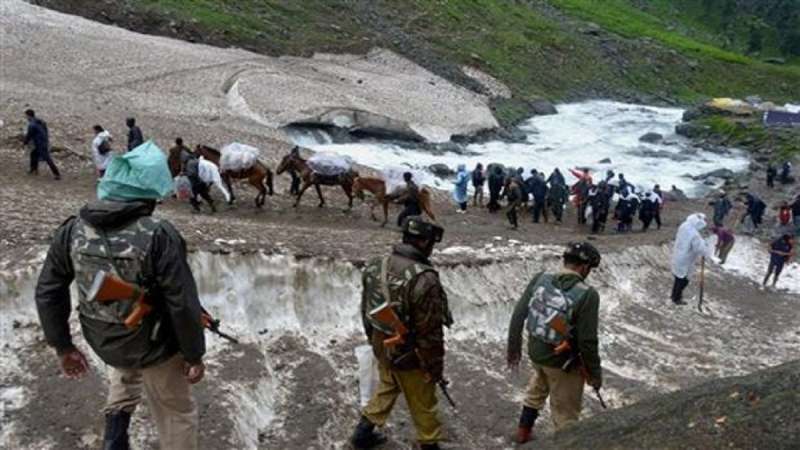 At least 12,000 paramilitary troops and hundreds of Jammu and Kashmir Police personnel, with the help of drone cameras, will guard the Amarnath yatra which is scheduled to begin on June 30 after a gap of two years, officials said. Union Home Secretary Ajay Bhalla on Friday reviewed the security preparedness for the annual pilgrimage to the cave shrine located in south Kashmir at an altitude of 3,888 meters.

The Amarnath yatra could not be carried out in 2020 and 2021 due to the coronavirus pandemic, while it was cut short in 2019 just before the abrogation of Article 370. The pilgrimage will be a big security challenge for the government as Jammu and Kashmir has been witnessing a number of targeted killings by terrorists in recent weeks.

The home secretary reviewed the security preparedness for the Amarnath Yatra with top officials of paramilitary forces and the Jammu and Kashmir administration, the officials said. About 12,000 paramilitary personnel (120 companies) in addition to Jammu and Kashmir Police are expected to be deployed along the two pilgrimage routes via Pahalgam and Baltal, they said.

Drone cameras will hover over the pilgrim routes to help the security forces ensure the protection of pilgrims, officials said. About three lakh pilgrims are likely to take part in the yatra, which is expected to end on August 11. Radio Frequency Identification (RFID) tags will also be given to the pilgrims.

CRPF Director General Kuldip Singh and BSF DG Pankaj Singh, along with other officers, attended the meeting physically, while Jammu and Kashmir officials joined it through video conference.

There has been a spurt in attacks on non-Muslims and outsiders living in Kashmir since the abrogation of Article 370 of the Constitution, which accorded special status to Jammu and Kashmir, in August 2019. On Thursday, terrorists killed a Kashmiri Pandit, Rahul Bhat, in Budgam district.
Bhat is the second Kashmiri Pandit to have been killed by terrorists in the last seven months.

A prominent member of the Kashmiri Pandit community, chemist Makhan Lal Bindroo, was shot dead by terrorists on October 6, 2021 in Srinagar. As many as 14 people belonging to Jammu and Kashmir's minority Hindu community, including Kashmiri Pandits, have been killed by militants in various parts of Kashmir between August 2019 and March 2022. Those targeted included prominent businessmen, sarpanches and block development council members. As many as 439 terrorists and 109 security personnel were killed in 541 terror incidents in Jammu and Kashmir till March this year after Article 370 was repealed, according to data provided by the government to Parliament.