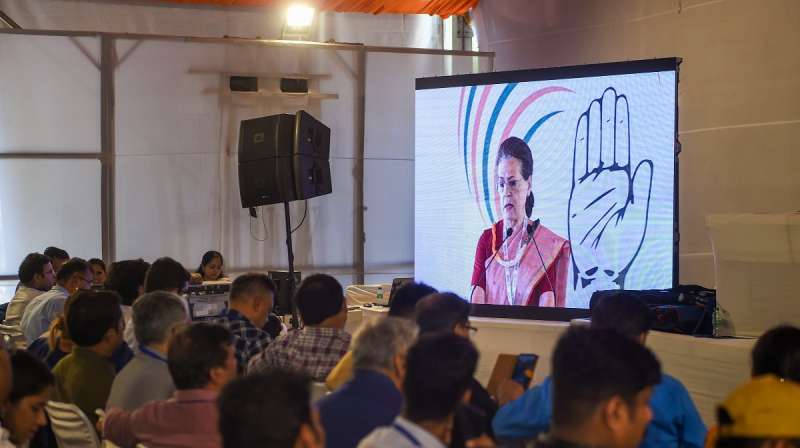 The three-day-long "Nav Sankalp Shivir" of Congress began in Rajasthan's Udaipur on Friday. The party's last "Chintan Shivir" was held in the year 2013 in Jaipur. Ajay Maken, who is the party's general secretary, said that this Chintan Shivir will usher in a new era in the party.

With over 450 leaders in attendance, the Shivir will have group discussions and brainstorming sessions for the grand old party, whose political strength is shrinking across the country. With its full-fledged government only in two states, the party is trying hard to win back its lost political fortune.

The Nav Sankalp Shivir is an attempt to infuse new energy into the party cadre by bringing much-awaited changes to the Congress party. Six committees have been formed by Congress President to look into various aspects of the party's revival. Day one of the session began with the Congress president's opening remark wherein she asked everyone to keep the party above personal interests and also asked leaders to pay back as Party has given a lot to everyone. The interim Congress chief also mentioned that it's time to pay back. She also attacked Modi Government for polarisation and misusing institutes and agencies.

The Party General Secretary, Ajay Maken, while addressing a press conference said the grand old party has not been able to use the tools of the democracy like its opponent, hence party is mulling bringing some path-breaking reforms in its organization and functioning.

Some Discussions And Proposals

There has been discussions and proposal on "one family one ticket" in the election. However, the party plans to make exceptions for those who have been actively working for the party for five years. In that case, the other member will also be considered for a ticket. Also, there is a proposal that any office bearer should not hold any office for more than five years and there should be a cool-off period of three years before someone could take up the post again. Also, there is a proposal, which has consensus and unanimity in the party that 50% post from top to bottom whether it's the committees or organisation of the party, should be given to people below 50 years of age.

The party is also planning to bring in an insight department, which will do 24x7 surveys for Congress to get a sense of what people think on various issues. One of the major criticism that Congress faces is that its leaders have no accountability, no punishment for wrongdoing and no incentive for the hard work that one does. To overcome this, Congress is planning to set up an assessment committee, which will assess the work done by the leaders and reward or punish them as per their performance.

During its Sankalp Shivir, the party will also discuss plans to set up mandal committees, which will act as an intermediary between the booth and the block committees of the Congress party.

The Nav Sankalp Shivir will also have a discussion about the party's strategy vis-a-vis alliances with other political parties. When asked if Congress would hold alliances, the leader of the Opposition in Rajya Sabha and the chairman of the political committee Malikarjun Kharge, said: "First, we will strengthen ourselves and that's why this Chintan Shivir has been called. We can take a call on our policies once we set our own things in order."

Day two of the Chintan Shivir will also have group discussions by all committees. On the last day, the party will pass a declaration on the decision that will be taken.

Congress leadership believes that Nav Sankalp Shivir will be a milestone in Party's revival and will infuse new energy into its cadre.