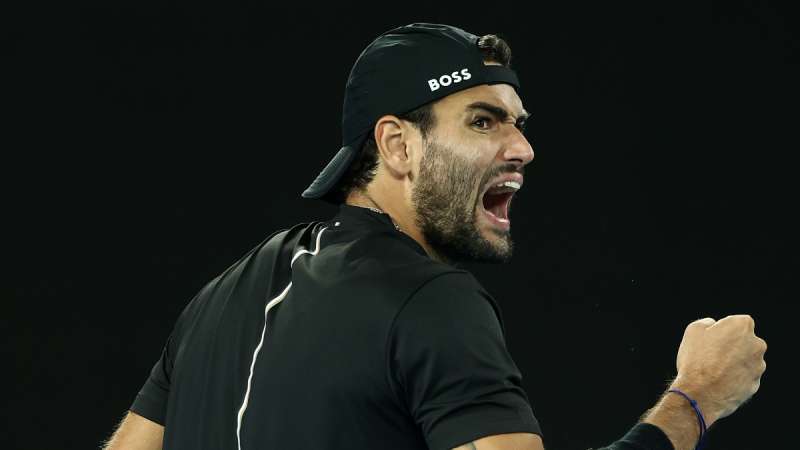 The Italian professional tennis player, currently world number seven- Matteo Berrettini defeated Gael Monfils of France 6-4, 6-4, 3-6, 3-6, 6-2 in a match that lasted for three hours and 49 minutes to enter the men's singles semi-final here at the Rod Laver Arena on Tuesday. The Wimbledon finalist will now face 20-time grand slam champion Rafael Nadal for a place in the final.

The seventh seed Italian Berrettini started off on a confident note breaking the Frenchman Monfils in the fifth game of the first set to take the lead. From there on Berrettini held his serves to win the opening set 6-4.

Matteo Berrettini got a great opportunity in the second set to take an early lead as he had two break points taking a 15-40 lead. But Gael Monfils held his nerve save those breakpoints and the Frenchman saved three break points in the game to win it. In the fourth game, Berrettini saved four breakpoints and the game went to 10 duece. Finally, there was a break of serve in the seventh game Berrettini broke Monfils to take a lead and went on to win the set by a similar score of 6-4 taking a two-set lead.

Just when it seemed that Berrettini could take away the match Monfils made a comeback. In the fifth game, Berrettini conceded a double fault to give Monfils a break as the Frenchman took a 4-2 lead and went on to win the set 6-3 as the match went to the fourth set.

Gael Monfils got the momentum and the Frenchman broke Berrettini in the fifth and ninth game to win the set 6-3 and make it two sets apiece as his wife.

The fifth and final set the Italian made a roaring comeback breaking Berrettini twice in the first and third game to take the race to a 4-0 lead ultimately winning the set 6-2 as well as the match. The Italian will now face 20-time grand slam champion Rafael Nadal in the final.

- With inputs from ANI