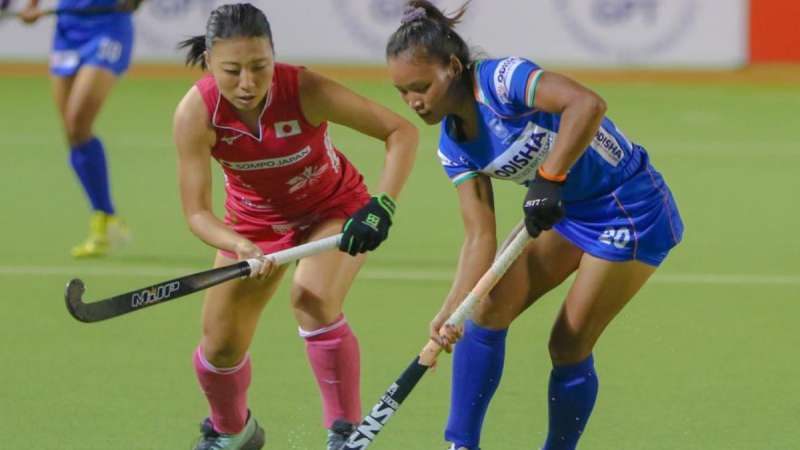 Japan scored through Naga Yuri (2nd minute) and Saki Tanaka (42nd minute) to stun the Indians. A slow start from the Indians cost them dearly as Japan took the lead against the run of play in the second minute through Nagai Yuri.

Yuri took full advantage of a sleepy Indian defence to slap home from top of the circle after taking hold of a loose ball.

The Indians woke up after conceding the unexpected goal and controlled the proceedings of the first quarter from there on. They attacked in numbers and in the process, secured two penalty corners in the first 15 minutes but wasted both.

Japan kept a tight defensive structure as the Indians, despite creating numerous chances, failed to find the back of the net.

Japan earned their first penalty corner in the second quarter but the Indians defended well. Japan eventually went into the half time break leading 1-0. The Indians continued to dominate the proceedings after the change of ends but failed to create any real scoring opportunity.

Japan surprised India in the 42nd minute when Tanakana doubled the lead. Trailing by two goals, the Indians came out attacking and in the process secured two quick penalty corners but wasted both as Japan secured their second consecutive win in the tournament.

Japan are now atop Pool A with two wins out of as many games, while india are placed second after registering a 9-0 win over Malaysia in their opener.

Japan had earlier defeated Singapore in their opening match.

India will next play Singapore in their final pool match on Monday. The top two teams from both the pools will qualify for the semifinals of the tournament, which would assure World Cup for those who make it.