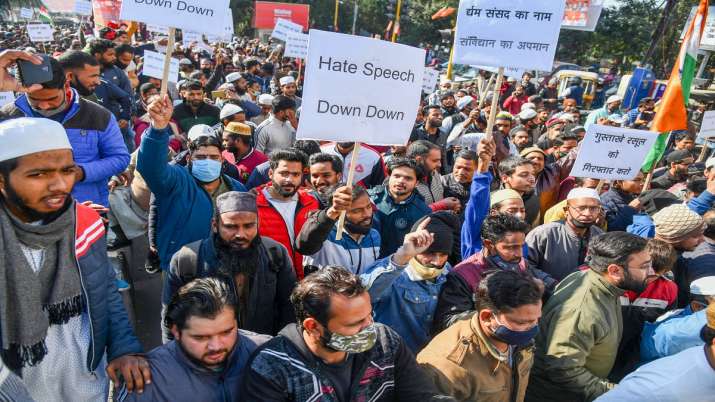 RSS body reaches out to Muslims in UP, condemns remarks made at Uttarakhand 'Dharma Sansad'

The RSS' Muslim wing on Sunday carried out a public awareness campaign in three districts of Uttar Pradesh and held meetings with Muslim clerics and scholars to garner the community's support for the BJP ahead of assembly polls.

The campaign was carried out by a 10-member team of the Muslim Rashtriya Manch (MRM) in Amroha, Moradabad and Rampur districts of Uttar Pradesh, the RSS affiliate said in a statement.

"In all the three districts, we had long and intense discussions with the maulana of Jama Masjid, Qazi and Muslim intellectuals like doctors, lawyers, and engineers on the problems that the members of the community are facing and their solution,” MRM's national convenor and media in-charge Shahid Sayeed told PTI.

During the meetings, the MRM said in a statement, members of the Muslim community raised concerns over “growing animosity” in the society, referring to the remarks made by some of the participants at a 'Dharma Sansad' in Uttarakhand recently.

“They felt that the kind of statements made at the Dharma Sansad were not right for any civilised society,” the MRM said.

“Md Akhtar clarified that neither the government nor the Sangh had anything to do with any such Dharma Sansad and also told them that the MRM does not support such people and it strongly condemns their remarks,” the outfit said.

The MRM team also apprised the community of various measures taken by the Narendra Modi government for the “welfare and empowerment” of Muslims especially the women.

They also heard their problems and assured them of addressing their grievances if the party retained power in the state.

In the meeting with Muslim intellectuals, the MRM said, serious discussions were held on the issues related to education, health, security and self-reliance of Muslim society especially its women.

The community members were assured that the MRM will continue to hold a dialogue with them “even after the elections are over,” Sayeed said. The RSS' Muslim wing recently released a 'Nivedan Patra' (letter of request) and appealed to the minority community to vote for the BJP in the upcoming assembly polls in five states, including Uttar Pradesh, saying Muslims are "most secure and happy" under the BJP rule whereas the Congress, SP and the BSP considered them just as vote bank.