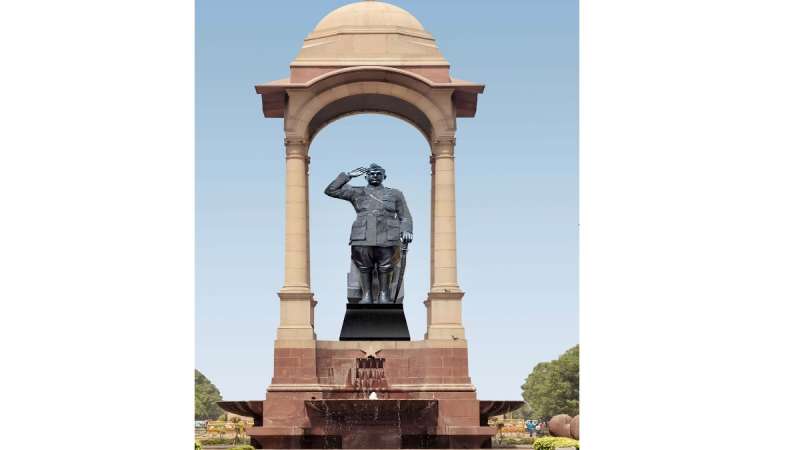 The daughter of Netaji Subhas Chandra Bose, Anita Bose-Pfaff, on Friday hailed as "a nice gesture" Prime Minister Narendra Modi's announcement about installing a statue of the iconic freedom fighter at India Gate and hoped it will put to rest the controversy over rejection of West Bengal's tableau for the Republic Day parade.

Welcoming the decision as "better late than never", Bose-Pfaff said the announcement took her by surprise. Netaji's grandnephews Sugata Bose and Chandra Kumar Bose too appreciated the announcement made by Modi, but said the best tribute would be to follow the freedom fighter’s ideology of equality and unity.

"I am very happy about the decision. It is very good location. I am certainly glad that his statue would be put up at such a prominent place. What surprises me is it came all of a sudden now. One might have prepared a bit earlier, but better late than never, I must say.

I hope that the controversy about the tableau can also be put to rest in a satisfactory manner," Bose-Pfaff told PTI over the telephone from Germany, where she lives.

When asked if she thinks that the decision was taken to end the tableau controversy, she said she is not in a position to comment on it. "I don't know. Let's put it that way. Last year the centenary celebrations had started, and there were announcements that all sorts of things should be done. This committee (for celebrating Netaji's 125th birth anniversary) was set up, of which I am also a member, (the panel) never called a meeting. As far as I know, I haven't heard about it." "Then all of a sudden, when West Bengal government had proposed to send a tableau, the central government turned it down... I do think that even if the decision came late, it is not a bad decision. It is a nice gesture in any case," she said.

Sugata Bose, also the chairman of Netaji Research Bureau, said, “We obviously welcome this decision. But I feel that the real tribute to Netaji would be to follow his principles and legacy of equality and unity. To follow his ideology of inclusiveness, uniting all communities, caste would be the true homage.” Echoing him, another grandnephew of the freedom fighter Chandra Kumar Bose said all political parties should follow Netaji's principle of unity and brotherhood among all caste, community and creed.

"The best tribute to Netaji would be ensuring that the country follows his ideals of secularism and communal harmony. The country is facing a situation where our communal harmony is facing challenges," he said. Ahead of Bose's 125th birth anniversary on January 23, the prime minister announced on Friday that a grand statue of the iconic freedom fighter will be installed at India Gate as a symbol of India's "indebtedness" to him.

Till the statue, made of granite, is completed, a hologram statue of his will be present at the same place, he said. Modi said he will unveil the hologram statue on January 23. As the rejection of West Bengal's tableau for the Republic Day parade snowballed into a major row, Defence Minister Rajnath Singh wrote to Chief Minister Mamata Banerjee informing her that the CPWD's float for the occasion pays homage to Netaji Subhas Chandra Bose, but her TMC was implacable, saying the state's "dignity has been hurt.
"
In a letter to Prime Minister Narendra Modi, Banerjee had expressed "shock" at the rejection of the state's tableau, themed on Bose and his Indian National Army. It also featured other Bengal icons like Rabindranath Tagore, Ishwar Chandra Vidyasagar, Swami Vivekananda and Sri Aurobindo. Bose-Pfaff, the only child of Bose, had earlier said the legendary freedom fighter's legacy has often been "partly exploited" for political reasons.