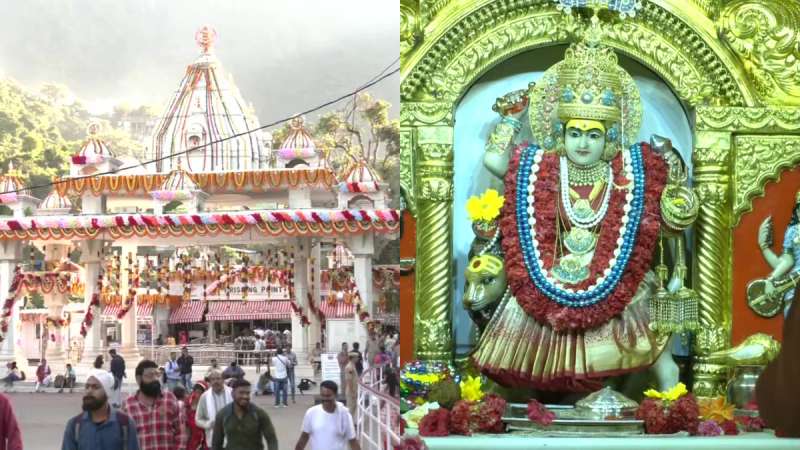 Navratri 2022: The nine-day-long festival, which is celebrated with much fervour, joy and excitement is here. Navratri celebrates Maa Durga and her victory over the demon Mahishasur. Navratri signifies ‘good over evil.' The final day of the festival is called Vijayadashami or Dussehra. On the second day of Shardiya Navratri, Goddess Brahmacharini is worshipped. Here the word 'Brahma' means penance and 'Brahmacharini' means - one who practices penance.

The festival of Shardiya Navratri festival dedicated to Maa Durga and her nine avatars, is celebrated with much enthusiasm all across the country by Hindus. As it commenced on September 26, marking the first day of the festivities, scores of devotees visited Maa Durga's temple to seek blessings. Take a look at how devotees across are celebrating the festival:

Devotees flocked to the Mata Vaishno Devi Mandir atop the Trikuta hills in Jammu and Kashmir's Katra on the first day today. The Shri Mata Vaishno Devi Shrine Board (SMVDSB) has put in place all necessary arrangements to meet the heavy rush of devotees, officials told ANI.

Hundreds of devotees thronged Kamakhya Devi Temple in Guwahati. As the entire country gets filled with immense fervour, devotees are rushing to visit various temples dedicated to Goddess Durga. Speaking to ANI, the head priest Kabindra Prasad Sarma said, "The Navratri has begun at Kamakhya temple from today. Kumari Puja has also been performed during Navratri. Today is Pratipada and one Kumari will be worshipped."

In India, Navratri is celebrated in a wide range of ways. Ramlila, a celebration in which scenes from the Ramayana are performed, is organised in various parts of the country. The burning of King Ravana's effigies marks the story's conclusion on Vijayadashami. During the Ramlila, the tale of Lord Ram's triumph over Ravana is acted out. ALSO READ:

In fact, on the tenth day of Navratri, also known as Vijayadashami, a large procession is organised during which clay figurines of Maa Durga are ceremoniously submerged in a river, sea, or ocean. Popular places to do this practice include West Bengal, Odisha, Assam, and Bihar. The most significant day for Maa Durga's worship is thought to be the day of Durga Visarjan.

Numerous dances, including Garba and Dandiya Raas, are performed during the nine-day festival. While Dandiya Raas involves dancing with dandiya sticks to the beat of the music, Garba is a traditional dance in which participants clap their hands and move in a circle while making rhythmic gestures.